Almost appropriate: it was nearly a white-out at times...I'm wiped-out pretty much too. Yeah, it's a lazy link 'innit?

Today was the final day of cycling for this challenge...today's proposed effort was to ride the course of Italy's toughest one-day amateur event, Il Maratona Dles Dolomites which features 85 miles going forward and 15000' of climbing.

Our preparation had been immaculate in almost every concievable way- no cycling yesterday and a fairly minimal beer consumption to boot. What could stop us now? Well, a fresh snow-fall with accompanying killing northerly wind did pretty much that!


I was missing about 20% capacity-wise...just couldn't breathe fully and as a result Il Tractore stormed these climbs solo, and I felt the cutting cold with occasional snow-flurries more and more. I was mighty glad of our coffee stop atop Passo Pordoi: people inside looked at us like we should be sectioned (or whatever the Italian equivalent is) and it was hard to argue, hah-hah!

Andy said it before I could: we cannot attempt the full route...simple as. I think he was more gutted than I was (really?) but there was no other option. For the desperate descent he lent me a head-scarf which I would have gladly paid good money for: he said that he had forgotten that he had it with him as a spare and that I could've had the benefit of it earlier if he had have remembered. Cheers mate, hah-hah!


What made this ride even dafter was that the descents couldn't be taken for granted either because in the shade there may well have been icy patches (there certainly were underneath a couple of bridges on the way up...) and even in the sun there was the odd patch of snow. Nice. I adopted the MotoGP style of one foot down, just in case...no spills thankfully.

If we had've tried to press on and complete the course I am fairly certain that we'd be looking at a different outcome so we made the right decision. Always a first time etc.!

That concludes the cycling part of all this: it has been my hardest challenge to date, so it's about time that I said thank you to a few people. Without Simon Ekless's blessing I wouldn't have been allowed on the second part of this challenge and thanks also to his support team: Ian Wright Wright Wright, Amy, wheel-sucker Nick (hah-hah!), Matt, Sue and their new recruit Kara! You were all invaluable.

As always, a big thank you to my long-suffering roomie Andy: you made all this a lot easier than it otherwise might have been, although if you have any more bright ideas like climbing the Kitzbuheler Horn try keeping them to yourself, thanks all the same...


At the risk of stating the bleedin' obvious, a challenge like this is only a real success if enough people are minded to give their money to the charities that you are riding for and thankfully a lot of generous people have stepped-up yet again.

Any tough moments that I went through were strictly on a temporary basis, unlike the real challenges which the people whom we are trying to help face every day, which again is an obvious point but one worth holding on to. I really appreciate all your donations and I know that the charities are very grateful too. Good on you!

Click on this to help the Teenage Cancer Trust!

To help Marie Curie Cancer Care please click on this!

Altogether now..."This is the Self-Preservation Society!"

Just one more thing...please have a gander at my latest challenge...HERE. Cheers!

Posted by Simon Nicholl at 15:49 No comments: Links to this post


This was the first time we missed breakfast...there were mitigating circumstances, hah-hah! Felt a tad less shabby after a shower and we packed yet again (16 hotels in 16 days?) and headed-off downtown to recuperate, lakeside.
We found some other refugees lurking down there too, hah-hah!

From there we all boarded a coach for Verona Aeroporto and it was then a case of many handshakes and goodbyes all round. A good bunch but as is always the way with these tours you never get to spend enough time with folk to get to know them...to be fair, that's something that they're quite relieved about, hah-hah!

Il Tractore and myself then picked-up our hire car and were 'upgraded' to a slightly more spacious Renault Scenic which was handy. It still takes a bit of getting used to, what with having the steering wheel on the wrong side and everything...

The day ended better than it began with a 11/10 steak and some decent local vino...all good, but  the Maratona Dles Dolomites awaits on Tuesday...85 miles forward and 15000' up. Merde!


I know that I have repeated this ad nauseam, but this venture has been the hardest to date and if you feel minded to donate then please hit the links below...thanks!

Click on this to help the Teenage Cancer Trust!

To help Marie Curie Cancer Care please click on this!

Please click here to help the Royal British Legion!
Posted by Simon Nicholl at 14:38 No comments: Links to this post

Not their finest hour maybe but pretty good all the same! 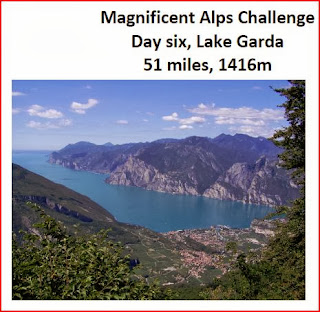 We had a more relaxed start today owing to the reduced mileage- only about 35 miles to the finish by the north end of Lake Garda. There was a drag of a climb though before our coffee stop and our semi-pro rider/ Marco Pantani a-like, Nick, went chasing after some local speed-merchant. I tried to go with them too just for a laugh and I managed to stick it for 500 yards before my HR hit 250bpm! Folly, but fun...


The coffee-stop had some locals imbibing some chilled fizz which looked so, so inviting: so much so, that Il Tractore and myself enjoyed a glass or two as well as some delicious aperitif nibbles. Surely this is how cycling should be?

After that was enjoyed we then proceeded to chase down a group who had set-off earlier...Gawd knows what wattage Il Tractore was churning out and I struggled to hold his wheel at times, never mind try and take a turn at the front. I think this was rightly looked upon as a last hurrah: we caned the next ten miles in a ridiculous fashion and duly caught the Valley Dwellers on the outskirts of Torbole. Legal drug use, you can't beat it...

Our team-leader Simon Ekless, despite still recovering from his exhaustion was there to meet us on the beach with a crate of beer and some fizz. I've always said he was alright!

There was such a tangible feeling of accomplishment and goodwill: it makes all the temporary hardships worthwhile. At the risk of sounding trite, our discomfort is temporary while the people who we are trying to help have things very different and a lot tougher. Every day.


From there we were given the choice of putting our bikes in the van and being driven the mile-and-a-bit up to our hotel. Drive? At this point? No chance, so we saddled-up and pointed our front wheels skywards for the final time.

A nice easy bimble is what it should've been but I had the bright idea of sprinting past everyone which had the desired effect of getting Nick to take it up and fly up the climb at warp-speed. I came back to him but he merely shouted some colourful words and disappeared up the road again. It's nonsense like that that makes the day more memorable and fun!

The rest of the day was spent reliving the adventure with the rest of the team over a few ales, and then a celebratory dinner. Sleep came easy...

Proud to say that I went and gave it some today! 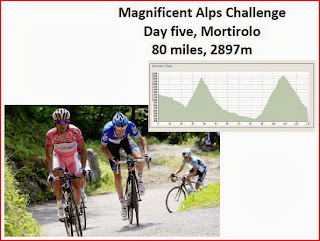 Today's stage featured two climbs: the big guys that we were taking down (yeah, right!) were Il Mortirolo and the Passo Croci Domini. Sounds easy, I agree but these were no gimmies...that said, my improving form saw me get up and give it a right good go...no more of the usual defensive "save my legs, ride for tomorrow" guff, just give it a real shoeing...pay-back time!


From there it was a regulation descent (cows allowing) to Edolo and a re-grouping coffee stop...awwww!

This just left the final 'named' climb of the tour...the Passo di Crocedomini. Not to be underestimated in temperatures approaching 30c. This SOB just wouldn't quit. Thankfully, neither did we and my slight form continued to allow me to get up there first. Smug? Yeah. Great feeling!

It was a seemingly never-ending slog up there but it was brilliant to have one of the support cars pass me by, with Mr Pat Openshaw hanging out of the door shouting much-valued encouragement. Good on ya', Pat...that alone was worth a few hairpins, hah-hah!

It was a sketchy descent in places but so wonderful to experience...we arrived at the hotel first again which is a real nice feeling. It guarantees you quick service at the bar for one thing...
It was Graeme's 50th that night and the support team organised a cake and a card...good work folks! 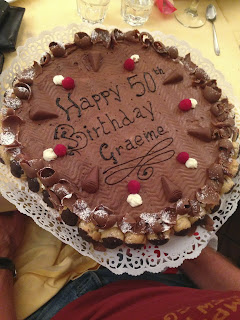 Posted by Simon Nicholl at 13:22 No comments: Links to this post

Hardly anything About Me. Good.